With a global race to develop a COVID-19 vaccine in full flow, will the unified efforts be enough to defeat the microscopic enemy, or has the war already been won?

Developing a functional vaccine is only the first step. Whichever company/country pioneers the vaccine will be in a commanding position, but they’ll have a humongous task at hand. This ‘Silver-bullet’ is bound to put them in a catch-22 situation. Distributing the vaccines fairly is probably the biggest challenge they face. Moreover, novel technologies are being used to develop most vaccines, thereby compounding uncertainty and risk. Thus cutting corners and fast-tracking vaccines could backfire.

Meanwhile, a number of countries worldwide, including developed and leading economies, such as the United States, France, and Japan, have suffered a recession as a direct result of the pandemic. GDP is a measure of economic activity in a country. Figures show that the UK’s GDP contracted by a staggering 20.4 percent in the second quarter(April to June 2020). The GDP in France has contracted 13.8 percent, 12.4 percent in Italy, and 12 percent in Canada. Germany has seen its economy shrink by 10.1 percent, and the US and Japan both follow with 7.6 percent. With global debt accumulating and no signs of relief, the World Bank has appealed for more ambitious debt relief plans for poor countries after warning that the Covid-19 recession could soon turn into a depression in the most vulnerable challenged parts of the globe.

Who is supposed to benefit financially from the vaccines? This is another question that haunts corporations and governments alike. Over $15 billion have been invested in vaccine development. Human resources, their perseverance, and race against time go unaccounted for. Although we cannot ignore the temptations of non-profit vaccine production, one could argue that if profit incentivises the companies to develop and distribute the vaccine faster, they deserve to be millionaires as a reward for their efforts. Hence, the cost of the vaccine could range from a few hundred to a few thousands of rupees. Governments will play a pivotal role in subsidizing vaccine costs and ensuring corruption-free and channelized distribution. Australia plans to make the vaccine free and compulsory amidst a backlash from anti-vaccine activists. Many countries will have to follow this model if they plan to achieve global vaccination. 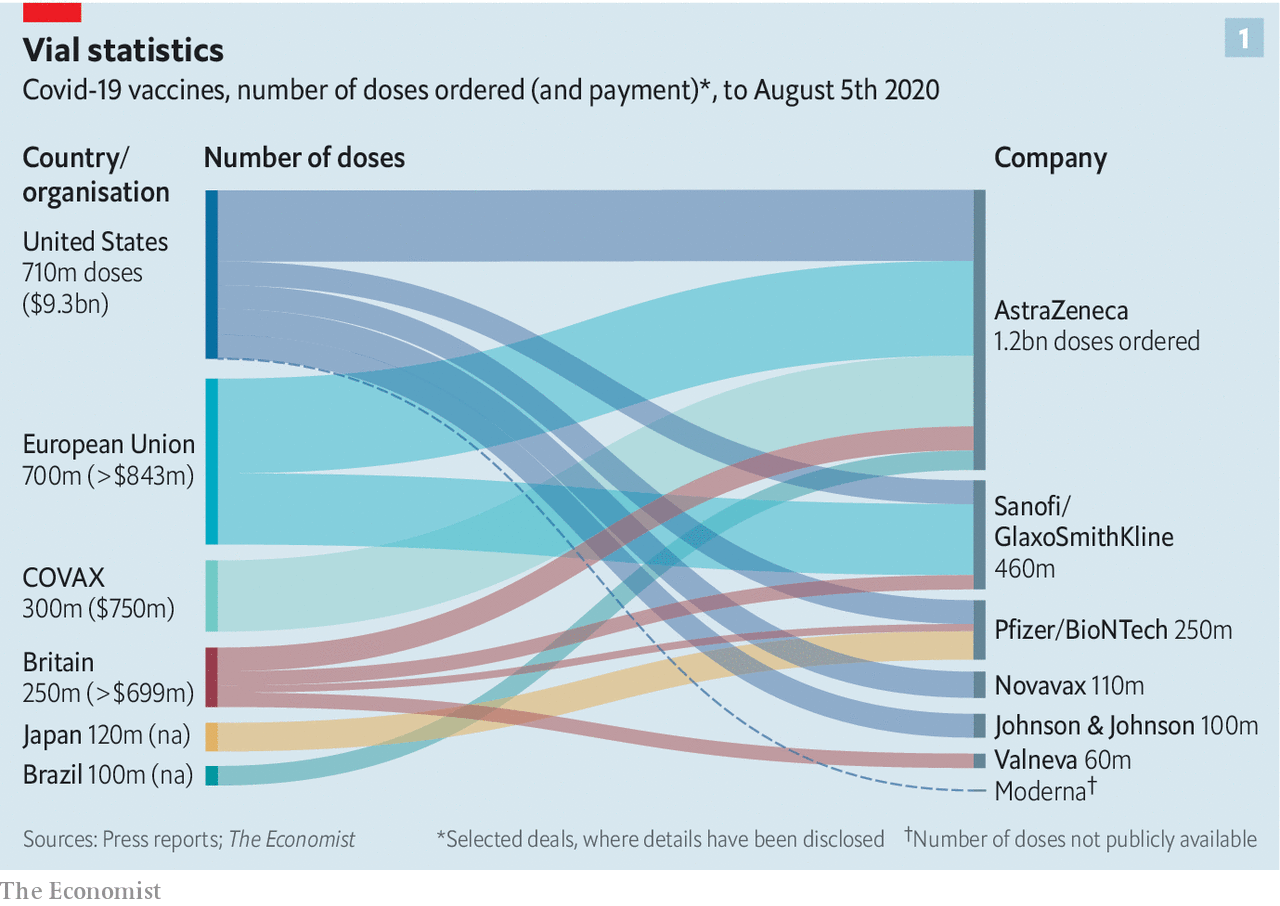 In 2009, when the world had just started recovering from the swine flu pandemic, the world’s wealthiest countries were all involved in a race to procure the swine-flu vaccine for their populace.  The hoarding of the vaccines by more prosperous countries came at the cost of poorer countries having shortages in vaccine supply. As the planet finds itself in the middle of an even more deadly and widespread pandemic, billions of citizens in the developing world face a similar problem. While researchers continue to test their vaccines through multiple clinical trials, national governments have invested billions of dollars on several vaccine candidates. The most prominent investors have mostly been richer countries like the US and the UK, which means that these vaccines would be unaffordable and inaccessible to billions of people living in developing countries.

Some world leaders like German Chancellor Angela Merkel and French President Emmanuel Macron have declared publicly that once a vaccine is discovered, it must be a global public good, implying all people should have equal access to it. However, these statements come at a time when the Netherlands, Germany, France, and Italy have signed a contract with AstraZeneca, one of the world’s biggest pharmaceutical companies, to buy 400 million doses of their vaccine. The US too has signed contracts with different companies around the world, obtaining over 700 million doses for the country. In a world where all countries were on an equal footing, these bilateral contracts would not be a cause for worry. The problem arises because only a limited number of vaccines can be produced in a given time frame – if a few countries end up buying a majority of the world’s supplies, it leaves a significant proportion of the world unvaccinated.

An equitable distribution of the vaccines is not just a question of ensuring immunity to the virus. The pandemic has also left the global economy at a standstill, with some economists calling it the worst recession since The Great Depression of the 1930s. The countries that manage to vaccinate their citizens earlier would not just prevent subsequent outbreaks, but also revive their economies because of a healthy and productive workforce.  This leaves countries at the end of the vaccine queue with a dual risk to their citizens’ lives and livelihoods.

While the stockpiling of vaccines remains a big concern, it is also important to mention that several efforts have been made to promote international cooperation in vaccine development and distribution. The World Health Organisation (WHO), together with the Coalition for Epidemic Preparedness Innovations (CEPI) and the Vaccine Alliance (Gavi), started the COVAX facility in order to guarantee fair and equitable access to the COVID-19 vaccine to every country in the world. The facility invites national governments to join the program and collectively invest in different vaccine candidates. In return, the Facility aims to secure 2 billion doses of vaccine by the end of 2021, assuring every country of enough doses to immunize 20% of its population.   This program would significantly subsidise a vaccine for poorer countries, and reduce the risks associated with investing in a single candidate that could potentially fail. With the number of cases in the country being still extremely high, a vaccine becomes extremely important in achieving a long-term solution to India’s fight against the virus.  Three vaccines are currently undergoing human trials in the country. Of these, Bharat Biotech and Zydus Cadila are two Indian companies conducting phase-1 and phase-2 human trials in various parts of the country. The third candidate, developed by AstraZeneca and the Oxford University, has also been approved for human trials in India, which are expected to begin soon. The government is also closely following the data emerging from several other candidates, including Russia’s Sputnik V vaccine and United States’ Moderna-NIAID. The exact details of procurement processes and pricing are still being deliberated upon by the National Expert Group on Vaccine Administration.

In the manufacturing aspect, The Serum Institute of India has entered into an agreement with Bill and Melinda Gates Foundation, which will enable it to make vaccines available for about ₹240 per dose. According to this agreement, Serum would produce 100 million doses of one of the vaccines that would eventually become successful for supply to middle and low-income countries. It is expected that at least 50 percent of this tranche would be supplied within India.

Written by Sudharshan Sivakumar for MTTN and Yashvardhan Kandoi for ESOM