12 people from all walks of life. 12 civilians entrusted with making the decision of sending a man to his death.

While battle-hardened 5-star generals around the world hesitate to send men off into battle and certain losses, wouldn’t a panel of common folk be far more prudent in their condemnation? 12 Angry Jurors by Dramanon Manipal explores this idea, giving us a fascinating insight into the multi-layered worlds of criminal justice, democracy, and the human character.

On a beautiful Sunday evening in Manipal, caught in the limbo between rain and sunlight, the Syndicate Golden Jubilee Hall stood proudly, having hosted countless plays, concerts, speeches, and generations of Manipalites. As yet another crowd prepared to enjoy a play, Dramanon T-Shirts bobbed through the milling crowd and manned the entrance to the hall; a quiet confidence and a nervous energy was visible on the faces of their owners, the kind that tells you how hard they’ve worked to make this a reality, while at the same time hoping in the age-old prayer of the host that the night goes well.

With this being the first play I’ve ever been to, I was excited, to say the least. How would a play compare to a movie? How would they bring in the careful days and hours spent acting in front of a camera with a dozen retakes and “CUT!”s to the stage? And indeed, for the first few minutes of the play, I felt the telltale signs of artifice, that the enhanced tones and voices were not that of the actors themselves. But as time went on, and the actors settled into their roles, something curious happened. They were transformed, they grew into their personalities and became their characters. Puranjai Garg as Juror 3 was in close competition with Ishika Chakrabarty, Juror 10, as the angriest juror of the night and the two thrilled the audience with their powerful voices. Manahar Kumar, as Juror 8, was the pivotal character in the play and had an assured presence on stage and a smug countenance that was the perfect foil to the angry duo. 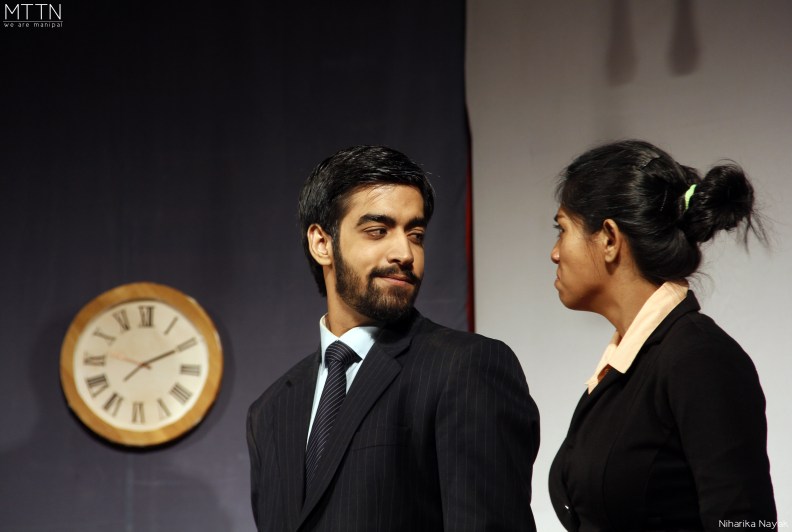 Beginning with the ominous story of a 19-year-old ‘man’ killing his father, the details of the case were laid out in a simple manner through a voice-over from the courtroom proceedings. In what promises to be an open-and-shut case, with all evidence and witnesses pointing to the son as the murderer, the jurors gather in the Jury Room to decide their verdict. Juror 8 (MK) is the only one that votes not guilty. His reasons don’t seem to be born out a belief that the son is innocent. Rather, he believes that the least they can do is talk about the decision before they send a man to the electric chair. As the play progresses, each piece of evidence is examined and proven to be shaky at best, with Jurors 3 (PG) and 10 (IC) becoming increasingly irate at the turn of events. As more and more jurors change their vote to not guilty, personal motivations and characteristics emerge in each. 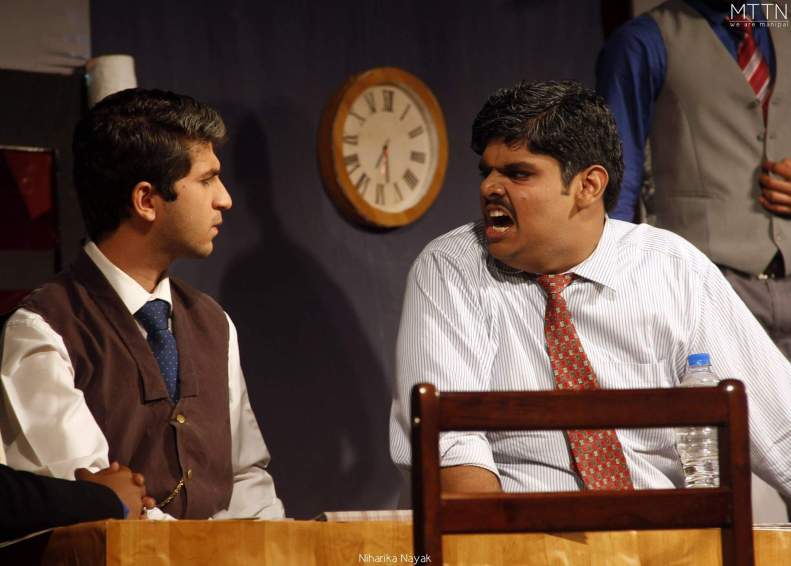 Juror 9, an elderly woman, played convincingly by Sindhu Annamalai, talks about why an old man, one of the witnesses in the case, would twist the facts, not of malice, but so he could feel important after 75 years of being ignored. As she passionately talks about the old man, one gets the sense that she is talking about herself in part too. Reuben Verghese plays the interesting character of Juror 2, who starts out as a person who seems to be unsure of himself and is continuously cut off from voicing his opinion by the louder voices of the rest, but towards the end, once reason takes hold, we see him hold his own. He seemed to be the representation of a large number of people in our society whose hearts lie in the right place, but often choose silence since they feel that they don’t have leaders or other voices to bolster their own. 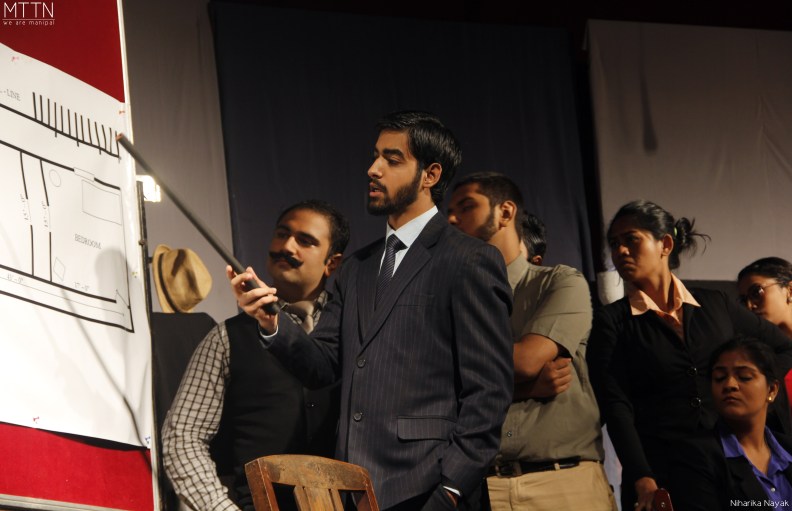 While all the actors excellently portrayed their characters down to their frowns and stares, Ishikha Chakrabarty and Puranjai Garg stole the stage with the sheer intensity of their performances. The former’s Juror 10 was willfully ignorant, closed off to facts and reason and driven only by fear. Her character was highly reminiscent of USA’s Donald Trump followers, with their close-minded rhetoric the product of years of fear mongering through news media. Juror 3, played by Puranjai, was an example of another section of Trump’s followers, the angry and the helpless. His angry outbursts might have made the audience jump in their seats, but the night ended with him pulling the heartstrings of everyone present as he mourns his long lost son, and gives up on years of festering anger and sadness at his son for hitting his own father and running away from home.

A testimony to the play’s stellar execution lies in it successfully capturing the audience’s full attention for a few hours even without a change of the main set, and this, with 9 of the 12 actors on stage being first timers! The background score, however, felt glued on as an afterthought and didn’t evoke any new emotions, as well-timed scores are ought to. The costumes went well with the tone and theme of the play, with two grand mustaches making a special appearance. Sindhu Annamalai’s elderly character was well put together, and her pace and tone of speech were a great help in successfully selling her age. The lighting was uniform, and the stage was smartly constructed so each actor was visible at all times. The production team tasked with managing a sold-out hall and around 700 audience members, handled the crowd skillfully and got them seated with the least hassle, one of the audience being the Director of MIT, Dr. G. K. Prabhu himself. 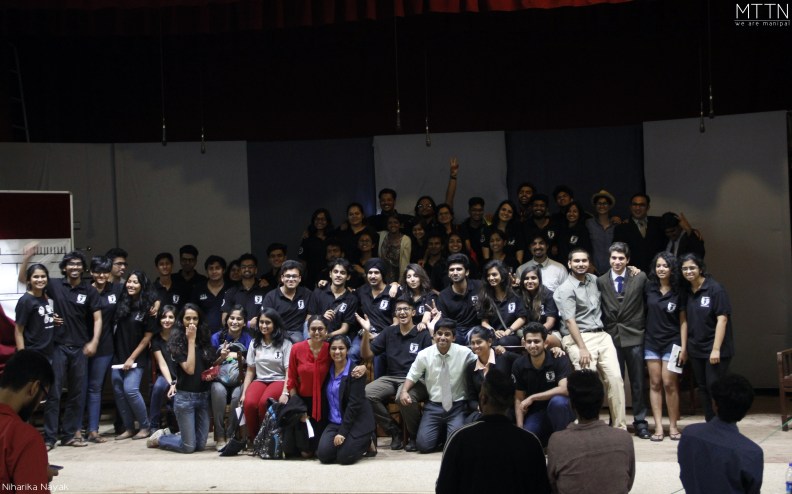 At the end of the day, I wish that Manipal had weekly theater so that I could rewatch the play multiple times, and leisurely discover the deeply hidden layers that lie beneath each of the Jurors. Inspired by the movie 12 Angry Men, 12 Angry Jurors by Dramanon was superbly executed, and the team completely deserving of the fifteen-minute standing ovation it received at the end of the night. Dramatist Anonymous, Manipal eagerly looks forward to your next play!