A dazzling colour scheme, a clever concept and a grabbing image—that’s all it takes to capture your interest in a film. An art form in its own right, movie posters have long been a huge part of movie promotion. A method of visual communication, they enable producers around the world to form a lasting first impression and capture the interest and curiosity of moviegoers. The digital era’s onset has opened many possibilities for the art of poster design, making them an essential source for meaningful communication. Their influence in our lives becomes clear when we think of a system where posters are the only communication source between the artist and the audience. Like theatre productions or contemporary circus, these art forms, in general, don’t use other sources for communication such as trailers or teasers. In such an environment, posters become the only medium through which creators can communicate with the audience and persuade them to engage with their art forms.

Posters are one of the most common forms of visual media seen worldwide; almost every person, irrespective of their economic or cultural backgrounds, engages with them at one point or another. From huge billboards to small A4 sheets stuck under the windows of local buses or abandoned buildings, we see them everywhere. They become inscribed in our memory; we remember the designs, faces, and colours used and often recognize the faces in different posters. How then, should an artist ensure they design posters which not only stand away from the plethora of already existing ones but also manage to capture the interests of the audience? Designers achieve this using different combinations of some basic elements- title, message, cast, colour, perspective, composition, and typography.

Artists use different elements to provide basic information about the movie’s premise, like time, place, and theme of the plot. The layout of these pieces of information furnishes a synopsis of the movie for the audience. Hence, posters provide a visual representation of the central theme of the film. Even after a movie’s release, posters act as souvenirs of the movie, a small glimpse of the poster is enough to recapitulate the entire plot and cinematography of the film. Their intricate designs and subtle details give the audience some food for thought before and after seeing the film. Thus, being a kind of art form themselves, posters also act as a portal for another artistic experience: the magic of movies.

DIFFERENT TYPES OF POSTERS AND THEIR TARGET AUDIENCE

There are as many kinds of movie posters as different movie genres. Just like every genre caters to a particular audience, so do posters. The type of poster and its design depends primarily on the movie it is made for and the target audience. Poster types also depend upon the movie’s assets, take, for example, the MARVEL franchise, their star faces are the greatest asset. The vast ensemble of stars and the crossovers from multiple storylines is the primary selling point of these movies, so it becomes quite apparent to see close up shots of the cast spread out in the poster. In contrast to this, art films or movies made by independent producers rely mostly on their plot, intricately crafted storylines and subtle details binding the entire movie together is their strong suit. As a result, such movies’ posters are usually stills from one of the significant scenes within the plot or a combination of details and elements central to the plot- anything which gives a peek into the storyline and makes the audience curious.

Since there are many styles of poster design working around a plethora of themes, it becomes very important to understand how we read a poster. A poster in itself carries a narrative, which, in return, contributes to the greater narrative of the movie. When looking at a poster one needs to weigh it using different perspectives and how different elements have been interlaced. While some look at the aesthetic design, others’ interests might be caught from the textual context of the elements used. What needs to be kept in mind is not giving anyone scale/perspective a superior position. Even while close reading the representational meaning of the poster, one needs to analyze both its breadth as well as depth.

In order to gain a better understanding of the themes discussed above, let’s take a closer look at the posters of Joker (Todd Phillips, 2019) and Avengers: Endgame (Joe Russo, Anthony Russo, 2019). Both movies are movie adaptations of DC and Marvel comics and achieved significant commercial success. The joker movie poster is a still from the movie where Arthur is going down the infamous ‘joker stairs’ while the Endgame movie posters give us close-up shots of the cast. Both of these have different symbolic meanings. The still used in Joker’s poster is essential because this is the time in the movie where Arthur becomes the Joker. Dancing down the stairs can be seen as going down (deeper) into the darkest parts of his character, while the dance symbolizes his celebration (acceptance) of that part. It becomes obvious then, as to why designers choose this still as the poster—this was the first scene of the Joker and also the most crucial. Moving on to Endgame, the poster at first looks nothing but close-up shots of the cast. Upon looking closely, we start to notice the subtle details, like Thanos’ face coming in the background or second layer of the composition as opposed to the Infinity War poster, where it covered approximately 1/3rd of the composition. This shift towards the background signals towards his end (defeat). Also, the characters represented in the poster are only those who survived the first war, while the cast list had several other actors Marvel chose to put only these, this kept the audience curious and on their toes. Lastly, the characters have their faces angled towards different sides, signalling the end of Phase-4 along with the original Avengers, and paving the way for the new generation. These narrative designs, however, are not limited to action films.
Romantic comedies have long followed the trope of the two leads back to back with each other with the name in big bold letters— pretty woman, how to lose a guy in 10 days, two weeks notice— take your pick. 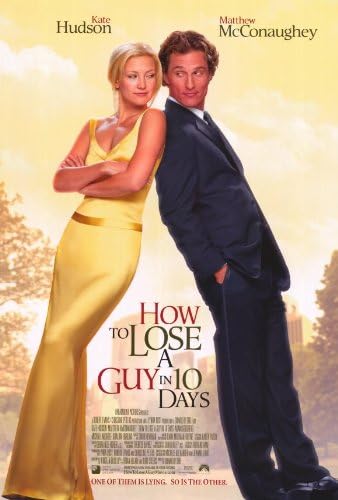 Dramas tend to have a large picture of the main characters over a small scene from the movie. Be it Titanic or Shawshank Redemption, the format has continued over generations and generations. However, sometimes marketing executives and studios decided to switch off— in a classic crossover, a lot of times the drama trope is used for romance posters such as the lucky one. Hence, we saw that even though the posters were just following a pattern of designs that are used almost everywhere, the elements were utilized in a way, which gave more meaning and depth to the poster. Since posters serve as the movie’s introduction, they ought to give moviegoers a glimpse of the narrative. This is generally done by using contextual symbols or one-liners/ dialogues from the film, which indicates the genre and premise of the movie. This is used very wisely by horror and thriller movie producers. Movies like The Conjuring (James Wan, 2013) and The Witch (Robert Eggers,2015) have used posters with phrases like ‘based on true case files of the warrens’ and ‘evil takes many forms.’ Both of them capture the audience in their own form, while Conjuring reveals the central premise and source of the plot, urging the audience to dig deeper, The Witch takes on the common cause of horror (evil) and old English lettering(the witch is stylized as THE VVITCH which was a common thing in the 1630s as the letter ‘w’ wasn’t common in use) to indicate towards the time and theme of the plot.  Hence, we see a lot of elements working simultaneously in the composition of a movie poster. All of them need to be read together in order to understand the structure and meaning of the poster. So the question arises- if these movie posters are so similar, why do marketing executives and studios keep sticking to the same designs?

Well, the answer is quite simple. Because it works. These various tropes and styles have been tried and tested- we know what works and what doesn’t. No one wants to take a risk when it comes to marketing million dollar movies.

This leads to blockbuster movies largely having the same boring style of posters. There is little creative freedom for artists to work with.

Through the choices of different fonts, effects, and perspectives, a text (any semiotic element in the poster) can have different meanings and interpretations. The advent of new graphic designing techniques and software has opened many possibilities for artists to explore through different layouts and styles of posters. The growing market for visual art consumption has further increased the scope of graphic designing in film cinematography, visual effects, and poster editing. Graphic designs give a new edge to posters, a great example of modern poster making would be from the movie It (Andy Muschuetti, 2017). It uses many themes and methods of poster designing simultaneously to give the desired effect. The colours red and yellow contrasting against the dark background brings to focus, the essential elements of the plot. The red, sloppy lettering of the title makes it look like blood, and the red balloon looming over the head of a child draws a parallel with death. Interestingly, although there are two characters represented in the posters, we don’t see their faces. The designers here have moved away with the close-up shots of haunted-looking people to elicit a reaction from the audience. Artists have used iconography in a clever form, showing instead of telling that the hand belongs to a dangerous character by attaching it with a symbol of death (the red balloon). The main character of the movie is Pennywise, yet we are only given a glimpse of his hand; this is specifically done to grasp the curious bones of the audience and leave them wanting for more.